“IQ is a metric of such dubiousness that almost no serious educational researcher uses it anymore,” the Guardian’s Ana Marie Cox wrote back in May. It was a breathtakingly ignorant statement. Psychologist Jelte Wicherts noted in response that a search for “IQ test” in Google’s academic database yielded more than 10,000 hits—just for the year 2013.

But Cox’s assertion is all too common. There is a large discrepancy between what educated laypeople believe about cognitive science and what experts actually know. Journalists are steeped in the lay wisdom, so they are repeatedly surprised when someone forthrightly discusses the real science of mental ability.

If that science happens to deal with group differences in average IQ, the journalists’ surprise turns into shock and disdain. Experts who speak publicly about IQ differences end up portrayed as weird contrarians at best, and peddlers of racist pseudoscience at worst.

I’m speaking from experience. My Harvard Ph.D. dissertation contains some scientifically unremarkable statements about ethnic differences in average IQ, including the IQ difference between Hispanics and non-Hispanic whites. For four years, the dissertation did what almost every other dissertation does—collected dust in the university library. But when it was unearthed in the midst of the immigration debate, I experienced the vilification firsthand.

For people who have studied mental ability, what’s truly frustrating is the déjà vu they feel each time a media firestorm like this one erupts. Attempts by experts in the field to defend the embattled messenger inevitably fall on deaf ears. When the firestorm is over, the media’s mindset always resets to a state of comfortable ignorance, ready to be shocked all over again when the next messenger comes along.

At stake here, incidentally, is not just knowledge for the sake of knowledge, but also how science informs public policy. The U.S. education system, for example, is suffused with mental testing, yet few in the political classes understand cognitive ability research. Angry and repeated condemnations of the science will not help.

What scholars of mental ability know, but have never successfully gotten the media to understand, is that a scientific consensus, based on an extensive and consistent literature, has long been reached on many of the questions that still seem controversial to journalists.

For example, virtually all psychologists believe there is a general mental ability factor (referred to colloquially as “intelligence”) that explains much of an individual’s performance on cognitive tests. IQ tests approximately measure this general factor. Psychologists recognize that a person’s IQ score, which is influenced by both genetic and environmental factors, usually remains stable upon reaching adolescence. And they know that IQ scores are correlated with educational attainment, income, and many other socioeconomic outcomes.

In terms of group differences, people of northeast Asian descent have higher average IQ scores than people of European lineage, who in turn have higher average scores than people of sub-Saharan African descent. The average score for Hispanic Americans falls somewhere between the white and black American averages. Psychologists have tested and long rejected the notion that score differences can be explained simply by biased test questions. It is possible that genetic factors could influence IQ differences among ethnic groups, but many scientists are withholding judgment until DNA studies are able to link specific gene combinations with IQ.

How can I be sure all of this reflects mainstream thinking? Because, over the years, psychologists have put together statements, reports, and even books aimed at synthesizing expert opinion on IQ. Many of these efforts were made in explicit response to the periodic media firestorms that engulfed people who spoke publicly about cognitive science. It’s worth reviewing some of those incidents and detailing the scholarly responses—responses that are invariably forgotten before the next furor begins. I’ll place my own experience in that context.

Let’s start 25 years ago[1], with the publication of The IQ Controversy, a book by Mark Snyderman and Stanley Rothman. The authors surveyed more than 1,000 experts in the field of cognitive science to develop a picture of what the mainstream really looks like. It was very similar to the description I’ve supplied above.

Snyderman and Rothman systematically analyzed television, newspaper, and magazine coverage of IQ issues. They were alarmed to find that the media were presenting a much different picture than what the expert survey showed. Based on media portrayals, it would seem that most experts think IQ scores have little meaning, that genes have no influence on IQ, and that the tests are hopelessly biased. “Our work demonstrates that, by any reasonable standard, media coverage of the IQ controversy has been quite inaccurate,” the authors concluded.

In conducting the expert survey and contrasting the results with media depictions of IQ research, one would think Snyderman and Rothman had performed a valuable service. Surely public discussion of IQ would now be more firmly grounded in science?

It didn’t happen. Richard Herrnstein and Charles Murray’s The Bell Curve was published in 1994, and real science was hard to find in the media circus that ensued. Herrnstein and Murray’s central claim about IQ differences shaping class divisions continues to be the subject of reasoned debate among social scientists. But non-experts in the media questioned whether IQ is even a valid concept. Intelligence research—psychometrics—is a pseudoscience, they said. The tests are meaningless, elitist, biased against women and minorities, important only to genetic determinists. And even to discuss group differences in IQ was called racist.

In short, the media did everything Snyderman and Rothman had warned against six years earlier. As a consequence, the interesting policy implications explored by Herrnstein and Murray were lost in the firestorm.

The American Psychological Association (APA) tried to set the record straight in 1996 with a report written by a committee of experts. Among the specific conclusions drawn by the APA were that IQ tests reliably measure a real human trait, that ethnic differences in average IQ exist, that good tests of IQ are not culturally biased against minority groups, and that IQ is a product of both genetic inheritance and early childhood environment. Another report signed by 52 experts, entitled “Mainstream Science on Intelligence,” stated similar facts and was printed in the Wall Street Journal.

“These may be harbingers of a shift in the media’s treatment of intelligence,” an optimistic Charles Murray wrote at the time. “There is now a real chance that the press will begin to discover that it has been missing the story.”

He was wrong. The APA report fell down the memory hole, and the media’s understanding of IQ again fell back to that state of comfortable misinformation that Snyderman and Rothman had observed years earlier.

So when Larry Summers, then the president of Harvard University, speculated in 2005 that women might be naturally less gifted in math and science, the intense backlash contributed to his ouster. 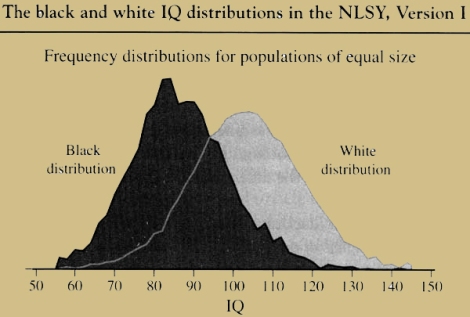 Two years later, when famed scientist James Watson noted the low average IQ scores of sub-Saharan Africans, he was forced to resign from his lab, taking his Nobel Prize with him.

When a Harvard law student was discovered in 2010 to have suggested in a private email that the black-white IQ gap might have a genetic component, the dean publicly condemned her amid a campus-wide outcry. Only profuse apologies seem to have saved her career.

In none of these cases did an appeal to science tamp down the controversy or help to prevent future ones. My own time in the media crosshairs would be no different.

So what did I write that created such a fuss? In brief, my dissertation shows that recent immigrants score lower than U.S.-born whites on a variety of cognitive tests. Using statistical analysis, it suggests that the test-score differential is due primarily to a real cognitive deficit rather than to culture or language bias. It analyzes how that deficit could affect socioeconomic assimilation, and concludes by exploring how IQ selection might be incorporated, as one factor among many, into immigration policy.

Because a large number of recent immigrants are from Latin America, I reviewed the literature showing that Hispanic IQ scores fall between white and black scores in the United States. This fact isn’t controversial among experts, but citing it seems to have fueled much of the media backlash.

And what a backlash it was. It started back in May when I coauthored an unrelated study that estimates the fiscal cost of granting amnesty to illegal immigrants. Opponents seeking to discredit that study pointed to my dissertation, and the firestorm was lit. Reporters pulled the dissertation quotes they found “shocking” and featured them in news stories about anti-immigration extremism. Well-established scientific findings were treated as self-evidently wrong—and likely the product of bigotry.

The professional commentators eagerly ran with that theme. Jennifer Rubin of the Washington Post called me a “fringe character.” Will Wilkinson of the Economist decried my “repugnant prejudice.” The New York Daily News published an unsigned editorial describing me as “the most twisted sort of intellectual” who is “peddling offensive tripe.” The Guardian’s Ana Marie Cox, whose quote began this article, called me a “bigot” and a “more subtle and dangerous kind of extremist.”

As with all the past incidents, most reporters learned nothing about IQ and seemed indifferent to any lessons for public policy. The works of mainstream scholars designed to educate lay people—The IQ Controversy, the APA report, “Mainstream Science on Intelligence,” etc.—were nowhere to be found.

Not all the media coverage was divorced from real science. Journalists such as Robert VerBruggen and Michael Barone wrote insightful reaction pieces. And the science-oriented blogosphere, which is increasingly the go-to place for expert commentary, provided some of the best coverage.

But it’s difficult to have a mature policy conversation when other journalists are doing little more than name-calling. It’s like convening a scientific conference on the causes of autism, only to have the participants drowned out by anti-vaccine protesters.

For too many people confronted with IQ issues, emotion trumps reason. Some are even angry that I never apologized for my work. I find that sentiment baffling. Apologize for stating empirical facts relevant to public policy? I could never be so craven. And apologize to whom—people who don’t like those facts? The demands for an apology illustrate the emotionalism that often governs our political discourse.

What causes so many in the media to react emotionally when it comes to IQ? Snyderman and Rothman believe it is a naturally uncomfortable topic in modern liberal democracies. The possibility of intractable differences among people does not fit easily into the worldview of journalists and other members of the intellectual class who have an aversion to inequality. The unfortunate—but all too human—reaction is to avoid seriously grappling with inconvenient truths. And I suspect the people who lash out in anger are the ones who are most internally conflicted.

But I see little value in speculating further about causes. Change is what’s needed. And the first thing for reporters, commentators, and non-experts to do is to stop demonizing public discussion of IQ differences. Stop calling names. Stop trying to get people fired. Most of all, stop making pronouncements about research without first reading the literature or consulting people who have.

This is not just about academic freedom or any one scholar’s reputation. Cognitive differences can inform our understanding of a number of policy issues—everything from education, to military recruitment, to employment discrimination to, yes, immigration. Start treating the science of mental ability seriously, and both political discourse and public policy will be better for it.