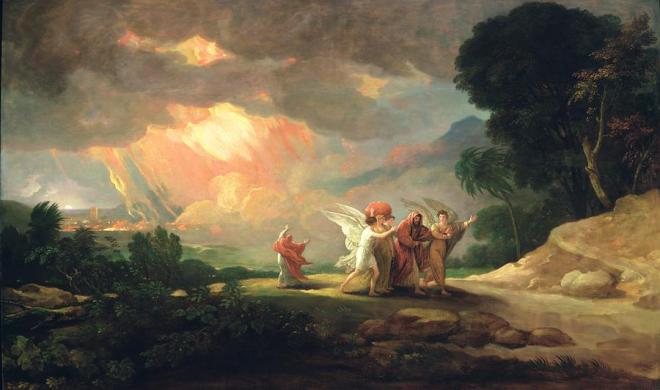 A painting about fleeing from Sodom

A year ago Richard Spencer, the editor of Radix, a popular white nationalist webzine, tweeted: “Homosexuality has been a part of European societies and culture for millennia. It is not going away, not something to get worked up about.”

The content of the below text has already been quoted in this blog but it’s worth re-quoting: a passage from a book-review by Michael O’Meara.

This subversive ideology now even aspires to re-invent homosexuals as the flowers of society: liberators preparing the way to joy, liberty, fraternity, tolerance, social well-being, good taste, etc. As vice is transformed into virtue, homosexuality allegedly introduces a new sense of play and gaiety to the one-dimensional society of sad, heterosexual males.

Except, Mr. Faye insists, there’s nothing genuinely gay about the gays, for theirs is a condition of stress and disequilibrium. At odds with their own nature, homosexuality is often a Calvary—and not because of social oppression, but because of those endogenous reasons (particularly their attraction to their own sex) that condemn them to a reproductive and genetic dead end.

As to the favorite counter-argument among homo apologists, O’Meara continues:

To those who evoke the ancient glories of Athens as a counter-argument, Mr. Faye, a long-time Graeco-Latinist, says that in the period when a certain form of pederasty was tolerated, no adult male ever achieved respectability if he was not married, devoted to the interests of his family and clan…

Pederasty as understood in classical times had nothing to do with any of the colors of that nasty LGBT flag.

See also “Queer Fascism: Why White Nationalists Are Trying To Drop Homophobia” and hetero Matt Parrott distancing himself from the pro-homo Counter-Currents webzine at an Occidental Dissent thread.

And now in Anglin’s latest article I learnt that Jack Donovan, featured by Spencer’s organization, had posted this:

Yeah, I’ve been a top for years. I basically fuck men like they are women—but I’m glad that they’re not. I’m banging this jacked rich liberal right now. Probably the best piece of ass I’ve ever had. I’ve had sex with women, but I’ve been with one guy for 14 years, so there is no question of… switching teams…in any meaningful way. He’s a good guy who supports me and my work and always has…

As far at The Way of Men [his book] is concerned: It’s either right or it isn’t. A lot of the ideas came from conversations with my straight friends about their frustrations with their lives. It’s not about me “converting” people. Let’s be real. I’m a jacked tattooed guy who is more or less a skinhead. Do you for a moment think I can’t get laid? The reality is I can post a pic to a hookup app and have someone blowing me inside of 3 hours. I’ll be able to pull prime ass from dudes with daddy issues for the next 10 years.

22 Replies on “Homos in white nationalism”