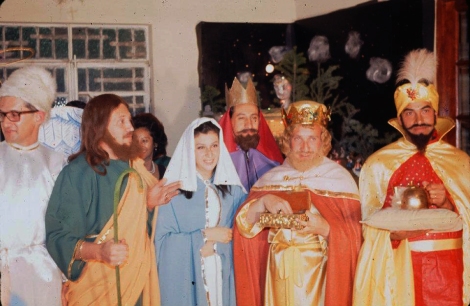 I’m coming from a funeral.
In the above pic, my uncles and an aunt appear in a costume party called here posada [1] when I was just a small child (ca. 1965). The uncle who appears with the blond beard died this morning.
He had married a very swarthy woman, almost an Amerindian, of very low social class: something harshly criticized in the family. A few months ago his wife and swarthy children confiscated his property, stole his money, and put him in a nursing home—and the whitest of the three biblical magi died of sadness in the asylum.
More than half a century ago, about the times when the pic was taken, a white American woman living in Mexico City was very much in love with him. Imagine the white kids the couple could have had after marrying in the big city, and then perhaps moving to the US.
But my uncle preferred Mexico and the mestiza of a lower class…
_________
[1] Posada: A Christmas festival originating in Latin America that dramatizes the search of Joseph and Mary for lodging.