The last words of Will Durant in the previous entry of this series: ‘Let us study The Republic‘. But in this post I will not quote any passage from Durant’s book. I will give my opinion on this classic work that bequeathed us historical Greece.
In the first place, it must be recognised that the race of the ancient Greeks was of the Nordic type. In The Fair Race there are two articles on the subject, one written by a Spaniard and another by an American. Since then civilisation has metamorphosed so much, especially in axiology, technology and demography, that what Plato wrote could only be valid after the extermination of all non-whites, as William Pierce put it at the end of The Turner Diaries. Sorry, but the Greeks of the ancient world were physically beautiful, says the article of the mentioned Spaniard. Hence, in our technological times with a demographic explosion that, because of Christianity, reversed the beautiful values of the classical world, only in an ethnically cleansed Earth what the ancient Greek philosophers discussed could become germane again.
The tragedy of the Aryans reminds me of the meaning of the One Ring in the tetralogy of Wagner, a symbol that Tolkien would pick up in his novel. It has been Aryan greed what blinded them to the fact that using non-whites as capital was suicide in the long term. That is the moral that emerges from the stories about the white race of William Pierce and Arthur Kemp. But even from the 19th century some Americans felt the danger, as shown in the paintings of Thomas Cole. A world with the destroyed Ring means, in many aspects, a return to the small cities: the subject matter not only for Plato but for Aristotle. For the latter, a Greek city should not exceed ten thousand inhabitants…
That is precisely the moral of my books in Spanish: after so many hells in ‘the Black Iron Age’ as I said as a teenager, I propose a return to the Shire so to speak. For the same reason, if there is something that hurts me when I see the sites of white nationalists, it is that they are cut off from their European past. I have spoken on this site about music, but not much about painting. The following is the oil canvas by Claude Le Lorrain (1600-1682) that appears at the top of my Facebook page: 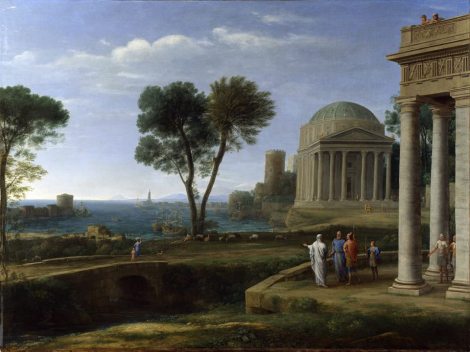 On my most recent trip to London I saw some splendid canvases of Le Lorrain’s paintings in the National Gallery. Outside of London and the madding crowd, some English aristocrats of past centuries took Le Lorrain as a paradigm to mould their extensive lands, and even some buildings in the countryside. Some of this can even be seen in the movies of this century. In this very beautiful film of 2005 for example, when Mr Darcy declares his love to Elizabeth, I could not contain my admiration for that place: it seems to be taken from a canvas by my favourite painter (watch the last ten seconds of this YouTube clip)! Who of the contemporary racists has such contact with their visual past?
A true racist should reject any image of pop culture sold to us by American Jewry. But going back to Plato. Let us suppose, just suppose, that the white race will emerge alive from the coming apocalypse and that, in an Earth already without Orcs and (((Sauron))), they would reconstruct white civilization. In an unpopulated land and with only a few small cities, like the one seen in the painting above, the question would arise as to what kind of government is desirable. In this world, the survivor could be asked about Plato’s magnum opus, something like a second chance or a fresh start for the West. So let’s expose our views about the philosopher.
The first thing I could say is that the distortion that is taught in the academy about the classical world is such that we would have to change the title of The Republic for the simple fact that it is an invented title. The original in Greek was Politeia, whose translation would be ‘regime or government of the polis’, that is to say how to govern a small city-state. The title The Republic falsifies the mind of Plato already from the cover of the book we see in bookstores, inducing the popular notion that the author was an utopian. He was nothing of the sort. Politeia was the recipe of Plato to remedy the bad governments he saw in ancient Greece. His starting point had been the examination of the Greek cities of his time, not of a hazy future but the four regimes of Greece: timocracy, oligarchy, democracy and tyranny.
Imagine a world à la Lorrain in which only whites inherit the Earth. The bookstores, this time with imprimaturs that do not admit anything from Semitic pens, would show Plato’s main work with the original title… But that does not mean that we should consider the disciple of Socrates a provider of laws, a new Lycurgus. At this stage of the historical game it is obvious that Plato did not see, nor could he see, the iniquity of the world; of men, of the Jewry that would invent Christianity, and the catastrophic industrial revolution.
For example, Plato does not speak of the need to keep Nordic blood pure, at least not with the lucidity the Nazis had. The closed polis of the Spartans complied more with the laws of nature than the open polis of the Athenians (in this Durant was fatally wrong). But not even the Spartans knew Pierce’s formula: to maintain an Aryan culture one must maintain the Aryan ethnicity: and that can only be done by exterminating or expelling all non-Aryans.
Plato’s missteps go further. Above I complained that the typical racist of today has no internal contact with the world of the great masters of painting. Another common ailment in those who have abandoned Christianity is that they keep infectious waste that puts the Aryans at a clear disadvantage compared to the Jewish quarter. One of these residues is the belief in post-mortem life. He who believes this doctrine will not fight as much in this life as the Jews are currently fighting, insofar as they believe they will have a second chance (either in the afterlife or reincarnated).
Jews do not masturbate their minds with unearthly hopes: one of their enormous advantages before us. But to be fair to Christianity I must say that even before Christianity Plato already masturbated his mind, and the minds of his male pupils, with such fantasies: what I have called in this series the root of the baobab. In fact, Plato finishes his great work sermonizing us: if we stick to what he says and believe in the immortal soul, we will be happy:

Thus, Glaucon, the tale has been saved, and will be our salvation, if we believe that the soul is immortal, and hold fast to the heavenly way of Justice and Knowledge. So shall we pass undefiled over the river of Forgetfulness, and be dear to ourselves and to the Gods, and have a crown of reward and happiness both in this world and also in the millennial pilgrimage of the other.

As I observed in a previous entry, during the savage destruction of most of the books of the classical world by the Judeo-Christians, it survived a work that many consider a precursor of the Christian doctrine of the human soul. The Republic, to use the falsified title, is anachronistic in many other ways. In addition to his post-mortem masturbations, what is the point of praising Plato when he did not oppose the incipient miscegenation of Athens with the greatest possible vehemence?
Unlike every rabbi who practices intuitive eugenics, Plato did not even leave offspring. He was not a husband or father. In his case, no good genes passed to the next generation (where his sperm ended, I dare not speculate). Moreover, he believed that in his republic women could perform the same functions of the male, even the highest. Compare the feminism of this philosopher of 2,400 years ago with what the Orthodox Jews of New York teach today: they educate their women to behave like little red riding hoods!
Whoever complies with the laws of Nature survives and who violates them perishes. At present the Jews fulfil them and the Aryans violate them. The white race will not be saved unless it makes a destructive criticism of much of what passes for ‘wisdom of the West’, starting with the Greeks.